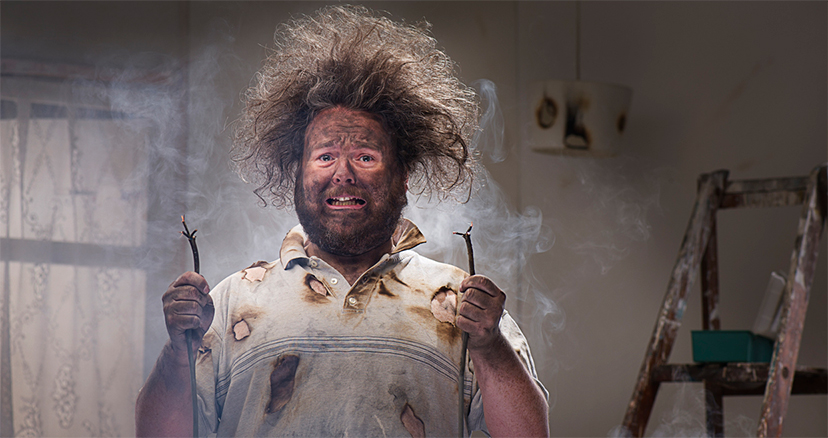 You may think your home or business is fire-safe, but fires are always a concern when it comes to old wiring. Here in Wichita, Kansas, there are still a surprising number of old residential and commercial buildings with aging electrical systems.

Electrical fires have been the cause of more than 50,000 home blazes every year, plus $1.5 billion in property damage. Even seemingly harmless acts, like putting nails into a wall, can easily put a hole in the wiring, causing problems you may have to come face-to-face with later. Here are six steps toward fixing your outdated wiring to ensure it’s no longer a fire hazard for your home or business.

Older buildings and homes tend to have what is known as “knob and tube” wiring. Knob and tube wiring consists of copper conductors that run within the wall or ceiling, passing through drill-holes via porcelain tubes and supported along their length with knob insulators. This design isn’t much of an issue until it’s compromised by a nail, chewed by a rodent or even situations where building insulation envelops the wires. Then, it becomes one of the leading causes of electrical fires, according to insurance companies.

In older buildings and homes, particularly those around 100 years old, it’s not uncommon for wiring to have been modified over the years by people who were trying to get a job done quick with no proper electrical training. This can mean that you have faulty wiring in your home. Check for buzzing, flickering or dimming lights and burn marks around outlets.

Appliances have come a long way since your old wiring was installed; we’re using many more appliances today than we ever have before. Older wiring can sometimes be rated for lower amps than is required by the appliances we use today. This can result in circuits being overloaded, which can cause a fire. Upgrading your electrical service panel can be one solution to low amp wiring.

Insulation on older wiring will eventually deteriorate and become damaged. Over the years, it may have been chewed by mice, damaged by nails being placed in walls or simply disintegrated from old age. Without sufficient insulation on your wires, they’re left exposed which can lead to sparks and a fire.

Wiring isn’t the only risk in older buildings. If your electrical panel is old, it’s possible that the switches and breakers that make up the circuits might be faulty. If they’re not working correctly, your electrical system won’t do what it is supposed to do which can lead to expensive problems in the future.

Poor electrical design is another major problem for older buildings. Electrical codes and standards have changed and improved over the years, meaning your home or business may not meet the current safety requirements. Even if your building was built in the 70s or earlier, there could be some electrical concerns hiding in your walls. If you’re not sure, then the best idea is to have an experienced electrical company come out for an inspection and make sure there aren’t any major fire risks.

If you own an older home or business in the Wichita area, call Graf Electric at 316-686-2090 to check for any faulty wiring that could lead to a fire.